What Makes a Hero?
Meet James Herman Banning and Find Out!! On November 5, 1899, James Herman Banning arrived in the world, just as the age of flight began its takeoff. His mother first cradled him in her arms the same year Orville and Wilbur Wright started their quest to build a flying machine.

On December 17, 1903, Orville Wright took to the sky in a powered biplane. He flew for 12 seconds and the plane covered a distance of 120 feet! Watch the real video!

As the boy called Herman learned to walk and talk on his family’s rural Oklahoma homestead, the Wright brothers studied lift, propulsion and control. And on Dec. 17, 1903, when the Wright brothers took to the sky in a propeller-driven aircraft at Kill Devil Hills in North Carolina, Herman was still just learning to leap and jump.

At six years old, he tore across the red dirt fields of his family’s farm, the string of a kite held tightly in his hand. As he looked longingly up at the speck of paper on its cross of sticks flapping against the deep blue of the Oklahoma sky, the Wright brothers were completing their most impressive feat yet, an unprecedented 39-minute triumph over Earth’s gravity. 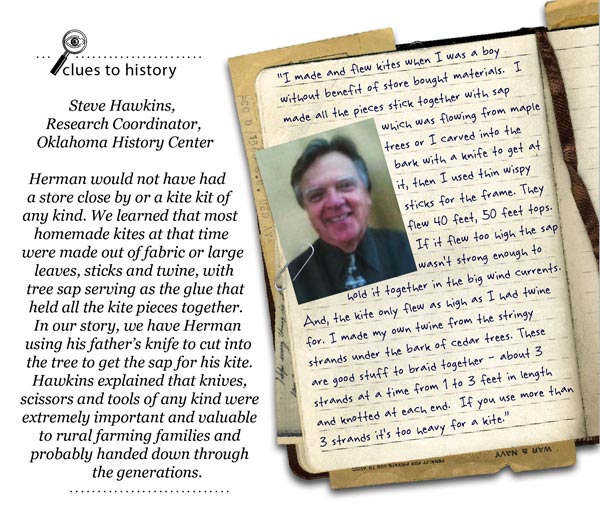 At the County Commissioner’s office in Oklahoma’s Kingfisher County Courthouse, we asked if they had any information about Riley Banning and his homestead. Surprisingly, the clerk, Connie Replogle, replied that her parents once lived nearby and had known the Banning family. She searched through drawers filled with piles of fragile old papers and eventually pulled out Riley Banning’s plat for his homestead. The plat showed us that the Banning homestead was located near the Cimarron River, just a few miles east of the town of Kingfisher. This information gave us a perspective of how close they lived to Guthrie, Kingfisher and Canton.

And at that moment, Banning knew he wanted to fly as well.

Mainstream America had used the voice of prejudice and hatred to decide that African Americans shouldn’t be allowed in the sky. America decided to judge Banning’s ability on the basis of his skin color.

Banning didn’t listen. He heard a completely different voice, one that said, “You can fly!” He tried to sign up with several flight schools. They all turned him down.

No school or individual would lend Banning the plane he needed so that he could complete his required solo hours in the air. Banning refused to be daunted. He bought the engine from Fisher’s crashed plane and accumulated plane and auto scraps to build Miss Ames. Flying his rickety homemade craft, he earned his solo flight hours and became the first African-American pilot licensed by the Department of Commerce in the United States. Banning believed strongly that freedom in the sky would help create freedom on the ground. He came up with an audacious plan to become the first African-American to fly across the country during the Great Depression, a time when all communities were looking for heroes to take their minds off dire economic straits. He wanted to be an aviation hero like Charles Lindbergh.

But Lucky Lindy had a custom-built plane and scads of money from financial backers to pave the way to achieving his dream of flying across the Atlantic. Lindy also had the blessing of the major newspapers, who covered his every move.

Charles Lindbergh had numerous backers—enough to pay for his expedition as well as build the perfect flying machine to cross the ocean. The Spirit of St. Louis, was custom-built – the Mercedes of airplanes for its day. It was constructed with numerous innovations: an engine with enormous power, wings stretched to 45 feet in length, fuel tanks which held over 400 gallons totally obscured Lindbergh’s view, and a periscope that allowed him a very restricted view ahead. The Spirit of St. Louis with its advanced modifications plus Lindbergh’s great skill as a pilot made it possible for him to successfully cross the Atlantic Ocean. What did Banning have in comparison? Banning, a top barnstormer of his time, had amazing skill as a pilot. What else did he have? Twenty-five dollars and a rickety old Eaglerock plane with a 14 year-old engine!

Banning had no backers and owned a dilapidated plane with a 14-year-old engine. And none of the large newspapers would bother writing about him.

Banning went looking for supporters on his own. He found a gifted mechanic named Thomas Cox Allen, who bought into the adventure for $200. Allen came up with the ingenious idea to fund their flight by soliciting small donations from people in each town they landed in, whether a warm meal, a place to sleep, or money for gas for the next leg of their journey. The donors would then inscribe their names on what Banning and Allen called “The Gold Book” — the wing of their plane. In this way, each contributor would share in a piece of history. Twenty-four communities participated and sixty-five individuals inscribed their names on The Gold Book, as Banning and Allen made their way across America. The dreams of many flew with them.

Because they were black and had no money, Banning and Allen not only had to fly the “crate;” they had to be able to service it as well. As Banning and Allen finally started to attract some attention, they became known as “the suntanned editions of Lindy.” 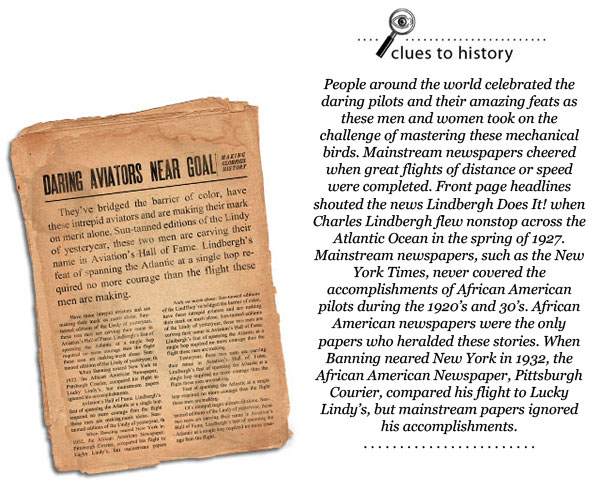 After an exhausting, adventure-filled twenty-one days of flight, Banning gloriously circled the Statue of Liberty and put down at Valley Stream Airport, in the suburbs of New York City.

In this photo from the Murlee Hart collection, words painted on the side of Banning and Allen’s Eaglerock airplane clearly state: NEGRO PILOTS – NEW YORK and that is exactly where the adventurous men landed – Valley Stream, New York. But, that’s not the whole story. Banning and Allen had no financial support taking-off from Los Angeles beyond 25 dollars that Allen donated to the cause. In order for Banning and Allen to reach New York, they relied on donations. People along their route gave money, shelter, food, mechanical parts and gasoline to help Banning and Allen reach their goal. Every person who assisted them along their route signed the wings of the Eaglerock. In a way, Banning took all these people with him on his historic flight. It’s too bad that the signatures aren’t visible on this photo. ‘There is not one inch of space on the wings of our old Eaglerock that is not written on by those who crowded us on our landing.’ said Banning upon their landing in Valley Stream, New York.

Read James Herman Banning’s life story, On Freedom’s Wings, and find out more about his struggles and triumphs!

“You know this motor is getting old, and while originally, it developed 100 horse power I have reason to believe that some of the horses are dead.”

Banning during the transcontinental flight